Curious to learn some facts about the condom? We gotchu! In line with National Condom Day, we will be sharing some little-known facts about condoms.

But for those who just stumbled upon this guide and are unsure of what a condom is, here’s a quick refresher.

A condom is a thin pouch that’s rolled over the penis during sex. It’s basically a barrier to stop the sperm from reaching the vagina, preventing you or your partner from getting pregnant. Aside from birth control purposes, this rubber pouch also prevents you from getting infected with sexually transmitted infections.

What’s great about condoms is that they’re the cheapest and most accessible form of birth control. You don’t need prescriptions. You don’t need to seek medical clinics just to get them. Heck, they’re available online. They also provide dual protection from unintended pregnancies and STIs.

The only downside to this birth control is its effectiveness. According to planned parenthood, male condoms are only 85% effective when used regularly. Now, the effectiveness can still be increased, but only if you’ve perfected the art of slipping on a condom. That’s why knowing how to properly use this contraceptive is essential!

Aside from learning the proper way to use a condom, here are other fascinating facts that you should know about condoms.

1Did you know that the first condom was made of a goat’s bladder sheath? 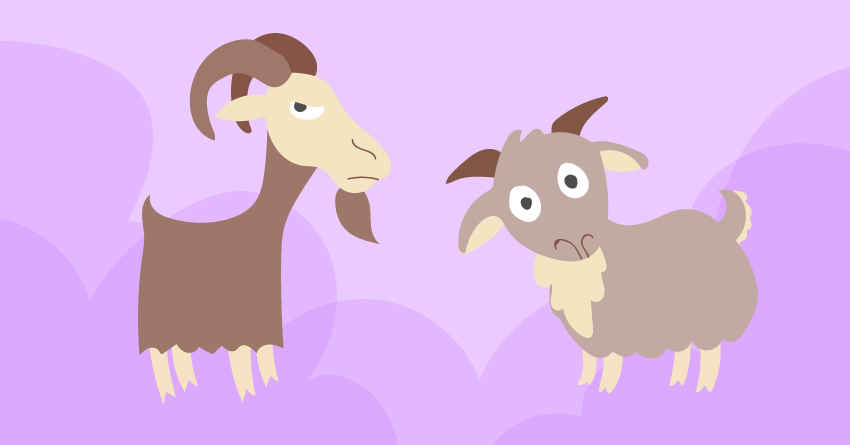 We know what you’re thinking… kinda gross, amirite? But think about it, the materials and machinery to make a rubber condom was only launched by 1855. Before this period, people have to be creative to produce their own condoms.

This is still being debated by archaeologists and historians. But according to several historians, the first condom was produced in 3000 B.C. for King Minos of Crete. According to this legend, he made a condom to protect his wife from his semen. He believed that his semen is full of “serpents and scorpions” and has resulted in several deaths from his other sexual partners.

2Did you know that the first rubber condom was produced in 1855? 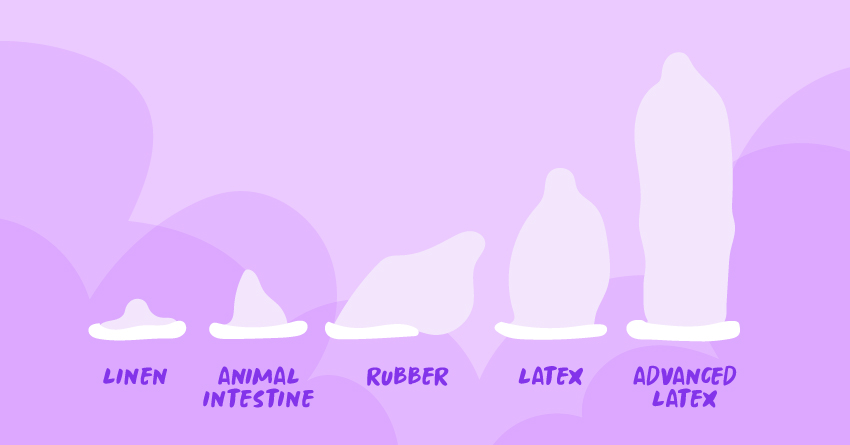 As time went by, people started making innovations in producing their condoms. There is early documentation, before the 15th century, showing limited use of glans condoms (only covers the head of the penis) in China and Japan. These early-types of condoms have been made with lamb intestine, oiled silk paper, tortoiseshell (ouch), or animal horn (another ouch).

But the game-changing innovation happened by 1855. During the Industrial Revolution in America, manufacturing with rubber has started to grow. By 1839, Charles Goodyear invented rubber vulcanization, resulting in rubber condoms being produced in 1855. During this time though, condoms made from other materials are still more popular, since they were cheaper. The first batches of rubber condoms also tend to fall off during intercourse.

By 1920, latex was introduced to the game. They became waaaay cheaper than rubber condoms and were easier to produce. It became so popular that it eventually replaced skin condoms.

3Did you know that Durex introduced the world’s first lubricated condom? Here’s one of the facts about the condom that did revolutionize the way we’re using this contraceptive.

Yes, this trusted condom brand introduced the first batch of pre-lubricated condoms. You see, by 1950 to 1960, 60% of married couples used condoms in Britain. This opted Durex to create new variations of condoms for their growing clientele. So by 1957, they produced lubricated condoms.

4Did you know that no one still knows the origin of the “condom” term? This is one of the facts about condoms that might fascinate you. Until now, there’s no solid proof that explains the origins of the term “condom.”

The only sure thing is that this term first appeared in the early 18th century. Some historians say that the origin of the term is related to an associate of England’s King Charles II named “Dr. Condom.” Others say that it came from the following Latin terms: Condon (receptacle), Condamina (house), and Cumdum (case or scabbard).

5Did you know that there are over 50 slang names for condoms? Certain brands are also associated with condoms. For example, when someone talks about Okamoto or Durex, people automatically think about condoms.

6Did you know that non-latex condoms exist? Here’s one of the facts about the condom that you should take note of. One of the misconceptions about the love glove is that all variations are made of latex rubber. That’s necessarily not the case as some people are actually allergic to latex. Now, should you or your partner is allergic to latex, here are some of the alternatives that you can use:

Synthetic Alternatives: What’s great about this is one is it can still protect you against pregnancy and STIs. If you want to try this type, just look for polyisoprene, polyurethane, or polyethylene condoms. Most mainstream brands carry this type of non-latex condom, so looking for one is easy-peasy.

Animal Product Condoms: For our vegan readers, this is definitely not for you. Condoms under this type are made from animals such as lambskin. One of the benefits of this type is that it actually provides a more “natural feeling” as compared to latex condoms. However, this type of condom can’t protect you from STIs. Apparently, lambskin condoms have small pores that allow the passage of viruses. So if you’re only up for a hookup, we suggest using the previous type.

If you’re interested in knowing more about non-latex condoms, we suggest checking this guide!

7Did you know that you can’t use two condoms at once? Here’s one of the facts about the condom that you should– and we can’t emphasize this enough– to remember.

If you’re thinking that putting a condom on another condom will increase its effectiveness, stop right there. Doing this will actually increase the chances of breaking the condom since the two condoms are going to rub against each other during the deed.

Now, if you really want to feel assured that the condom isn’t going to break mid-intercourse, opt for thicker condoms.

8Did you know that a condom can hold up to a gallon of liquid? Here’s one of the fascinating facts about the condom. As experimented with by Planned Parenthood, it’s shown that a condom can hold up to 1 gallon of water. So for our readers who are anxious about using a condom during sex, just take a look at this video and see how durable a condom is.

9Did you know sizes do matter when using condoms? Condoms fit on most penis sizes. However, some variants can be uncomfortable on their end. That’s why for our male readers, make sure to measure your penis (particularly the girth). After that, use your measurements as a basis for the rubbers that you’ll buy. Most mainstream brands have 2-2.2 inches of width/girth and 5-7 inches in length.

Read also: How Effective Are Condoms? Here are 15 Tips to Use a Condom Correctly

10Did you know that there are condoms for females too? 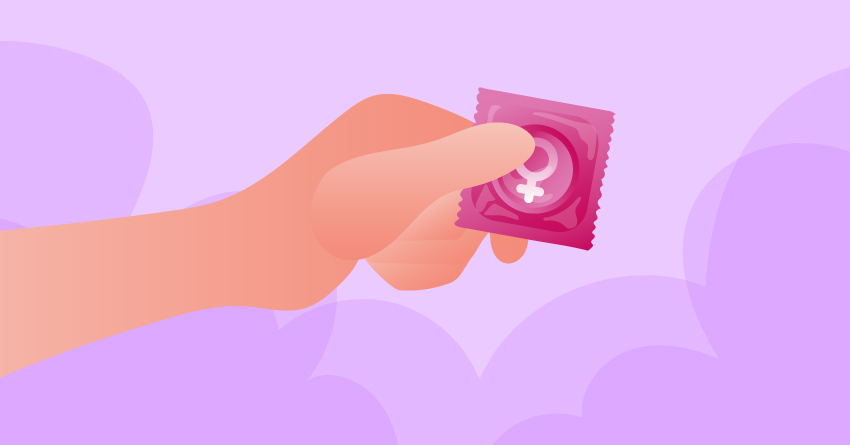 Here’s one of the facts about the condom that you should also take note of. Most people think that condoms are only worn by men, but that’s not necessarily the case. Female condoms are a thin pouch that you insert inside the vagina. It works as a barrier during intercourse and is 95% effective in preventing pregnancy and STIs– as long as you properly use it.

Check out this illustrated guide on how to use a female condom. Make sure to use the condom during the whole duration of vaginal sex. Don’t also forget to check the expiration date and overall state of the female condom before inserting it in your vag. And most importantly, never use a female condom and a male condom at the same time. As we’ve mentioned earlier, using two condoms is more prone to damage.

Condoms are one of the most accessible contraceptives right now. It’s low-cost and provides dual protection for you and your boo. You can also use it for your sex toys for easier cleanup and extra lubrication. Not only that, there are variations that add more pleasurable sensations during the deed.

The key is in its usage. As long as you’re equipping yourself with enough information on the proper usage of this contraceptive, you’ll do fine. So go ahead, say yes to safe sex and opt for the love glove!

Want more of these guides? You may request article topics through our social media pages: Facebook, Instagram, and Twitter. You may also inquire about some sex-ed topics through our resident Dr. Sex— she’ll be glad to help you out!