As we celebrate pride month, you’ve seen a variety of pride flags being waved in parades and events. You might think that these flags are representing how colorful the LGBTQA+ Community is but there are deeper meanings behind it.

With this brief guide, we will be discussing the different LGBTQA+ flags. We will talking about the origins up to the meaning of each represented color. But before we dive in, let’s have a quick refresher about pride flags and their significance.

What are Pride Flags?

Pride Flags are one of the ways one can represent their gender identities. Though there’s a general flag for the whole LGBTQA+ community, which is the rainbow flag, they wanted to showcase flags per spectrum. This is to bring awareness to each gender identity, as well as bring the community closer than ever.

Though various LGBTQA+ flags have emerged ever since the pride activities started in 1970, pride flags became more popular in the 2010s. By this time, more people become open with their non-conforming sexual orientations. Social media platforms such as Tumblr become a safe space for LGBTQA+ communities to thrive in.

Now you might be wondering, why are these flags essential for the LGBTQA+ community? Well, visible symbols of pride and support can be powerful, as these visual symbols give communities a sense of pride. It also brings reassurance to people that they’re not alone in this journey.

Now that you’ve been refreshed with quick info about pride flags, let’s move on to the main guide. We’ll be waving different pride flags that represent various gender identities. Learn what each flag looks like, their origin, and the meaning behind their design. Read on! 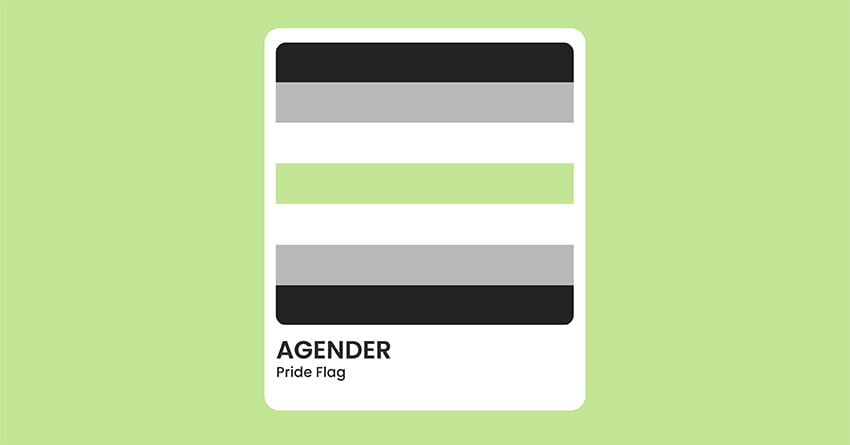 The Agender Pride Flag represents the agender people, who identify themselves as genderless. Some of the people under this spectrum decided to have no gender at all because there’s no specific term for them.

The agender flag was created by a Tumblr user named Salem X. It consists of the following colors: 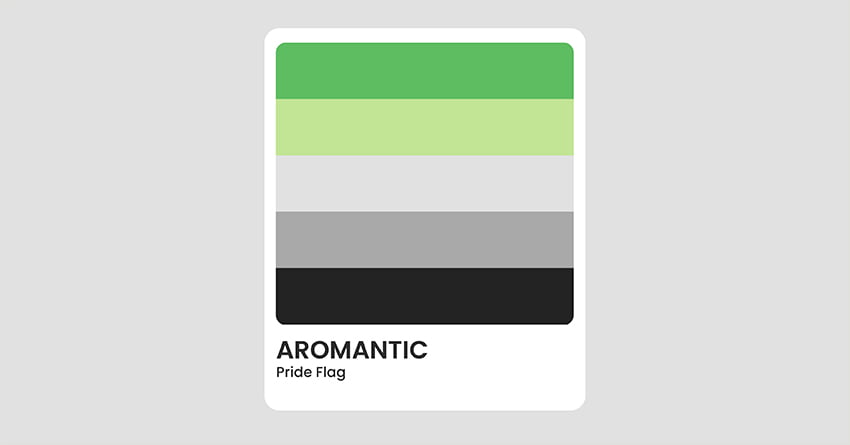 The Aromantic Pride Flag represents the aromantic people. People under this gender identity who don’t experience romantic attraction. They’re not necessarily incapable of feeling love, as some of them experience familial love and platonic love. It’s just that when it comes to the romantic-type of love, they feel disconnected from it.

This pride flag was designed by a Tumblr user from Australia named Cameron. The striped flag showcases five colors: 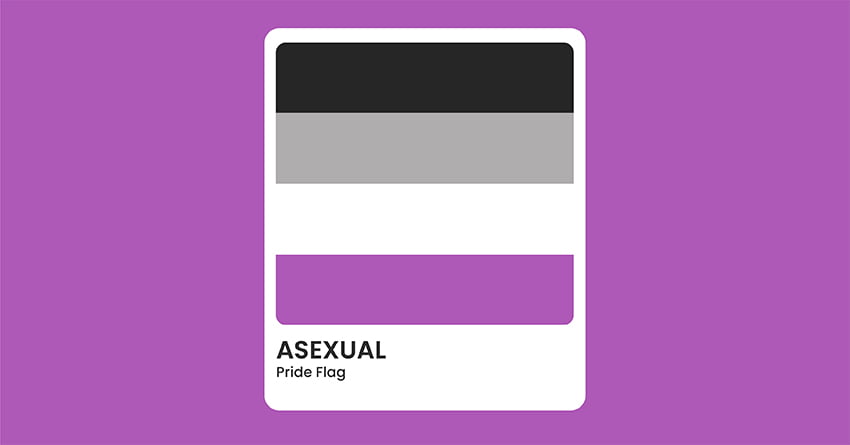 This 4-striped pride flag represents asexuality. People under the spectrum have a lack of sexual attraction to all genders. This doesn’t necessarily mean that they don’t have sex. Some of them do it as a way to maintain a bond with their partners. It’s just that they’re not enticed as most people do when it comes to sexual activities.

This pride flag was established back in 2010 when the Asexual Visibility and Education Network (AVEN) held a contest. The contest is all about creating a pride flag for those who identify themselves as asexual. After a couple of submissions, the winning design was submitted by “standup”, one of the members on the said network. It consisted of a stripe design with 4 colors: 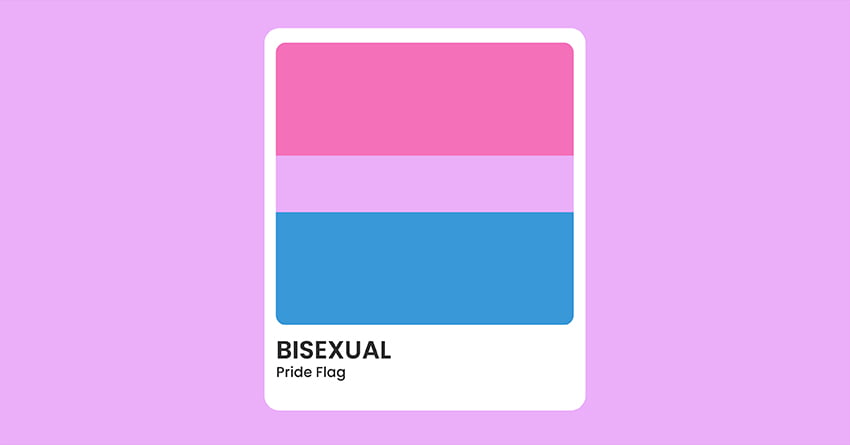 This vibrant pride flag represents bisexuality. People under this spectrum can feel physical or romantic attraction to two genders. The term was originated by combining the word sexual and greek prefix “bi” which means two.

Unlike the other pride flags on the list, the bisexual pride flag wasn’t established on Tumblr. It was created back in 1998 by Michael Page, as he wanted to establish bisexuality independently. He made the flag while working at BilNet USA, a non-profit organization. He then unveiled it at BiCafe, a website about bisexuality. 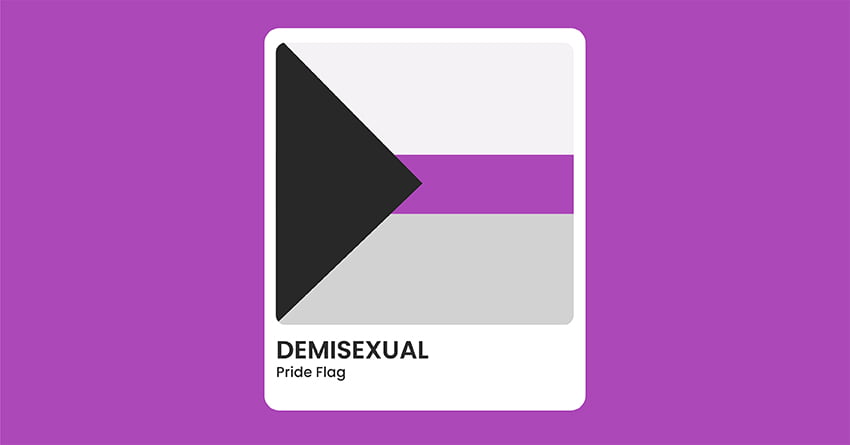 The Demisexual Pride Flag represents people who experience demisexuality. People under this spectrum can only feel sexual attraction to someone if they have a deep emotional connection with them.

Yet, there’s no concrete information available about the creator of the demisexual flag. The only thing available is the meanings behind the colors. It featured 4 colors: 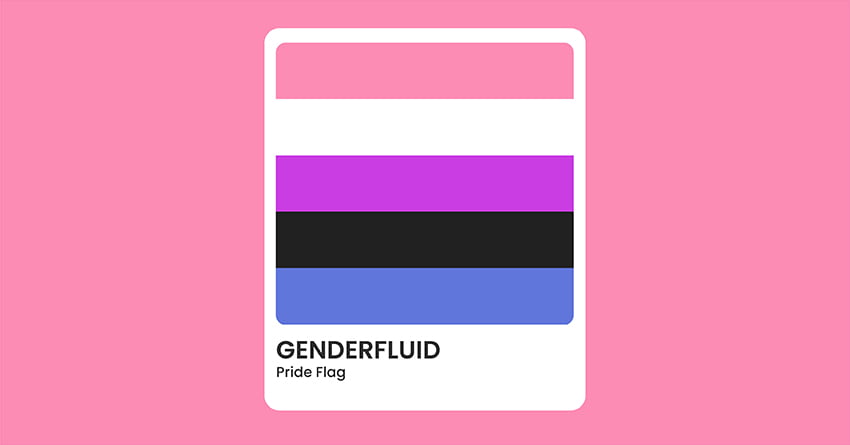 This pride flag was created by JJ Poole back in 2012 and features five colors: 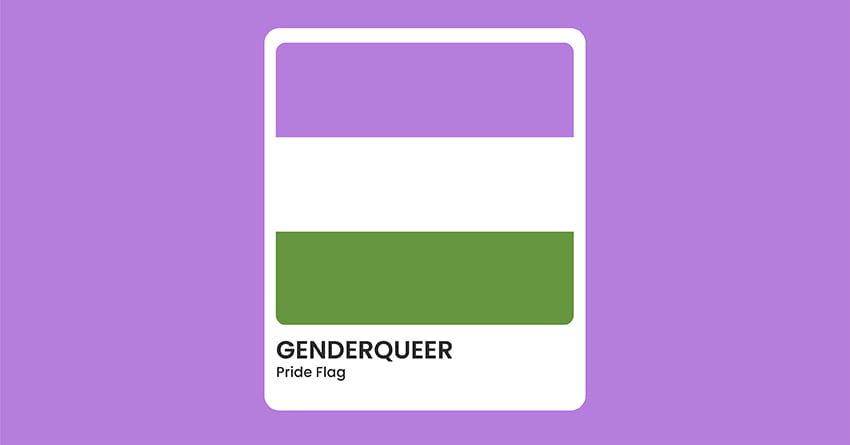 The Genderqueer pride flag represents people under the genderqueer spectrum. People who identify themselves as genderqueer don’t particularly have one gender, and may even have a combination of various genders. They also often see gender and sex as separable aspects of a person, identifying themselves as a female man, male woman, etc.

The genderqueer pride flag was designed in 2011, by a genderqueer writer and advocate named Marilyn Roxie. The 3-striped flag features lavender for both femininity and masculinity, as well as queer identities. 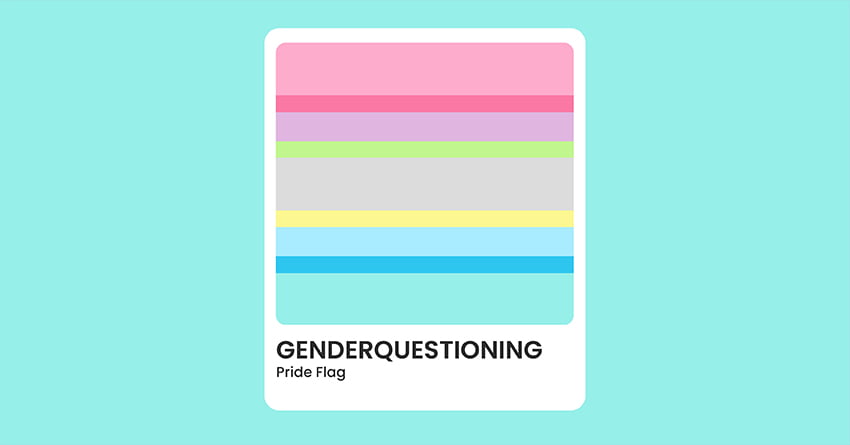 The Gender Questioning Pride Flag is for people that are still learning about their gender, or romantic orientation. It can happen at any age, and the process can take from days up to years.

There are several versions of this pride flag but the most known is the flag made by Enbygsrd on DeviantArt back in 2016. Ironically, the creator of the flag posted the flag without description, leaving people questioning its meaning. 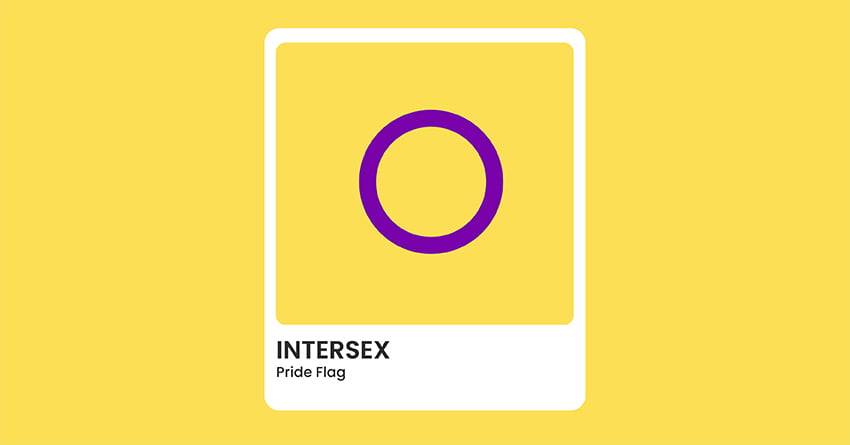 Most of the pride flags you’ve seen on the list feature a striped design, but here’s something different. The Intersex Pride Flag represents people who are born with physical sex characteristics that fall outside the strict definitions of male/female bodies. The people under this spectrum may be born with both female and male sexual organs or have genitals that look different as compared to their expected appearance.

It was created in 2013 by Morgan Carpenter, the former co-chair of Organization Intersex International Australia. The flag featured a yellow background which is known as a gender-neutral color. On the center, it shows a purple circle—purple color because it’s usually seen as a gender-neutral color and features a circle shape, representing wholeness and completeness of the intersex people’s potentiality. 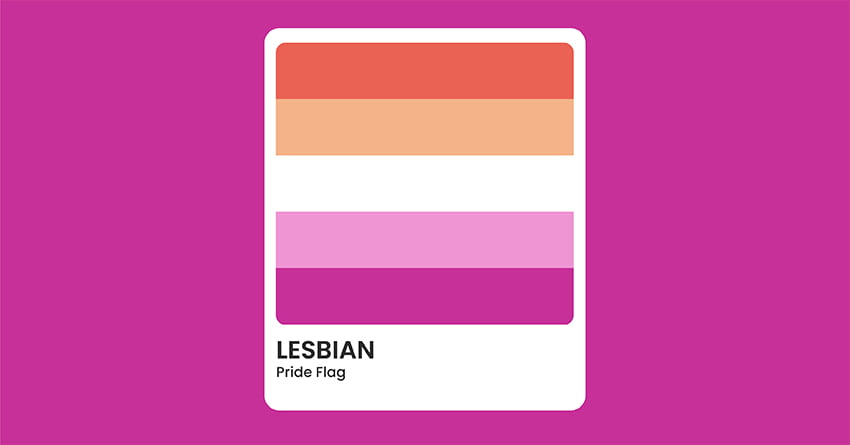 If you’ve searched about lesbian pride flag before, you’ve probably seen a flag with a kiss mark superimposed on a striped background of red and pink colors. That particular flag was made and unveiled on a weblog in 2010—it was meant for lipstick lesbians and only represents a small unit of the spectrum.

With that in mind, the lesbian community modified the said flag, removing the kiss mark design on it. The updated flag was then unveiled on medium.com, establishing the said flag as “A Lesbian Flag for Everyone.” Though some are still using the previous version of the lesbian flag, the modified lesbian pride flag is becoming more popular as time went on. 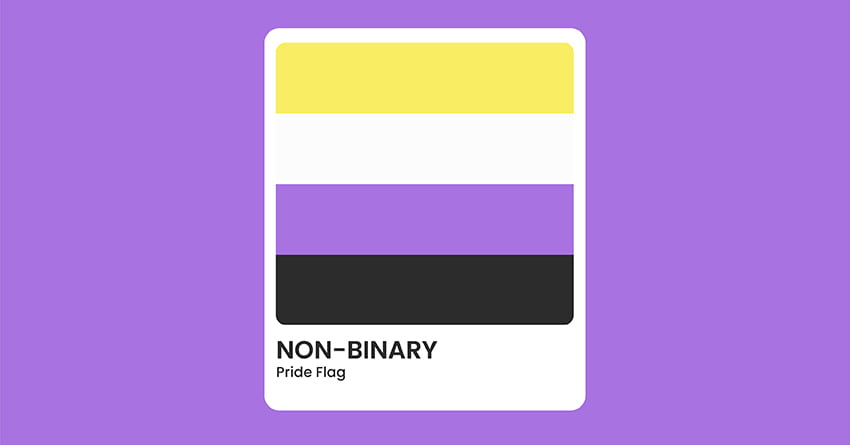 The Non-Binary Pride flag represents people who identify themselves as non-binary. Their gender identity isn’t fitting to traditional male or female binary.

The 4-striped pride flag was created by Kye Rowan. It features four colors: 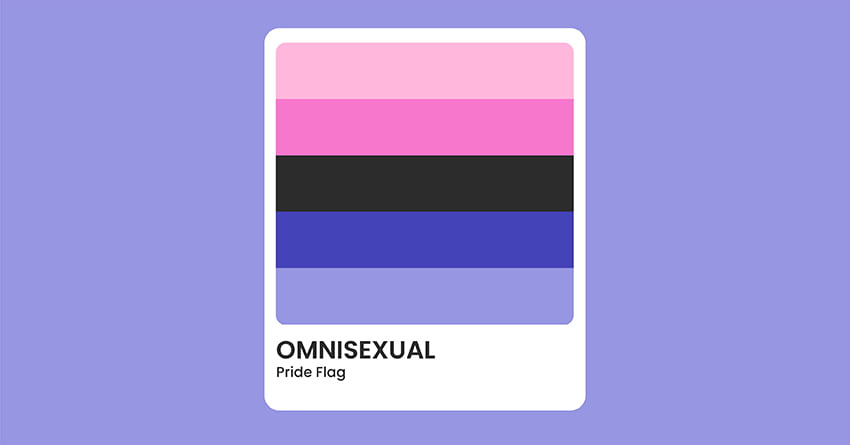 The Omnisexual Pride Flag represents people who are under the omnisexuality spectrum. When you’re an omnisexual, you tend to be attracted to all genders but still acknowledge the person’s gender identity and/or expression.

This pride flag features pink and blue shades, representing an omnisexual’s attraction to both feminine and masculine people. In the center, the black stripe stands for other genders. 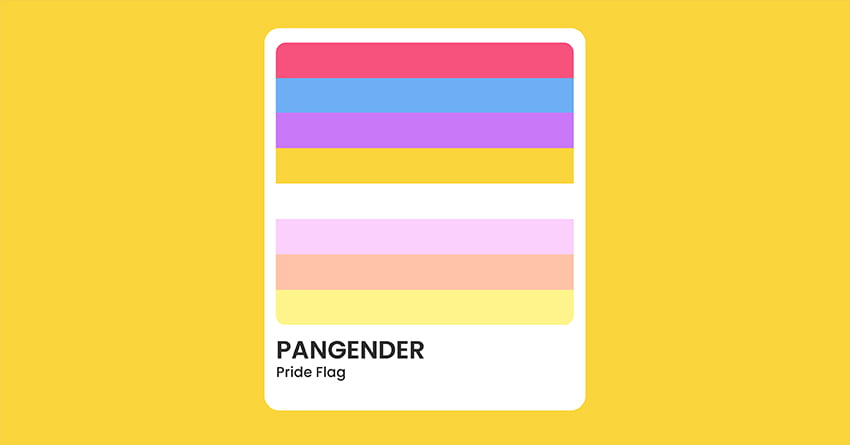 The Pangender Pride Flag represents people who embrace all genders. They usually feel an entire infinite gender spectrum and can be attracted to anyone, regardless of their gender.

This flag has tons of stripes, as compared to other flags. It features the following colors: 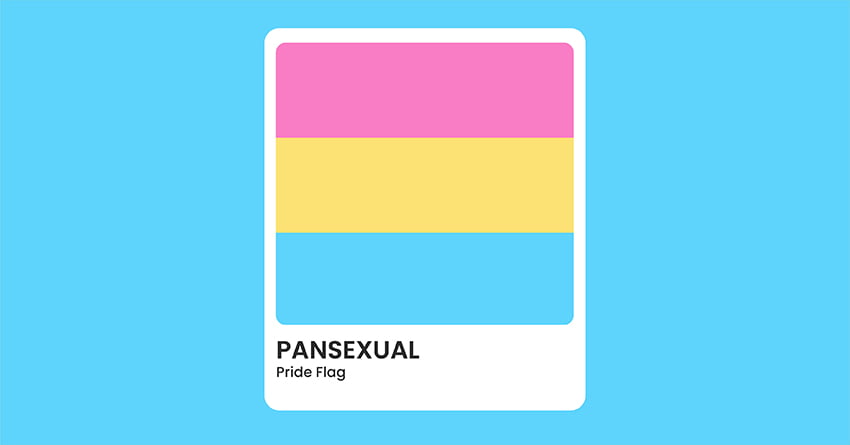 This 3-striped pride flag represents pansexual people. They can get attracted to anyone regardless of that person’s gender identity and/or expression.

If you’ve checked the omnisexual section above, you might be thinking that they are the same but it’s not. The difference between pansexual and omnisexual people is that pansexuals don’t acknowledge their partner’s gender identity. They just tend to blindly get attracted to them without the need to learn further about their sexual orientation.

There’s no specific creator that we can credit on this flag. But according to numerous sources, this flag started circulating around 2010. It features the following colors: 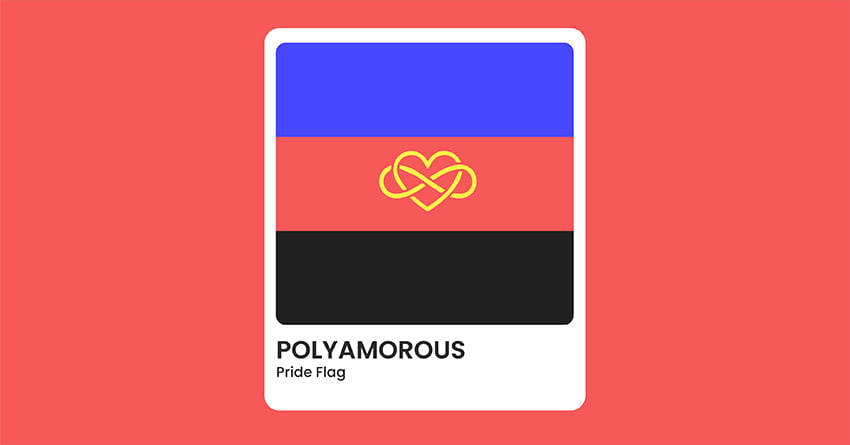 We’ve been talking about gender identities surrounding out-of-the-norm attraction. Here’s something that focuses on the number of people you can get attracted to.

The Polyamorous Pride Flag represents people who can love multiple people and be involved in multiple relationships. Now you might be thinking—isn’t this cheating? Well, that’s not what polyamory is. People who are in polyamorous relationships have mutual consent and have set up boundaries.

The polyamorous flag is just one of those pride flags that have symbols superimposed on it. It features a 3-striped background, having a heart-infinity design in the center of it. The heart design represents infinite love for multiple partners at the same time. As for the colors, here are its meanings. 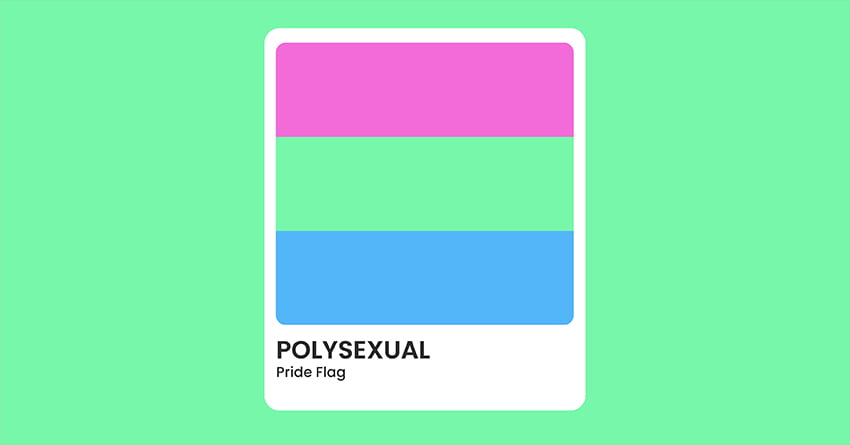 This flag was made by a Tumblr content creator named Samlin. According to Samlin, the colors and design of the flag are based on the pansexual and bisexual flags. It features 3 stripes of colors: 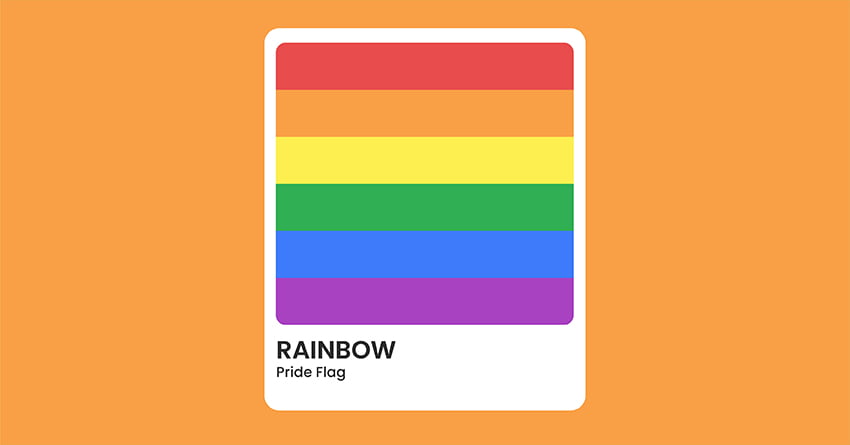 If you’ve been following LGBTQA+ channels on social media or tried joining a pride parade, you will surely see people waving this flag. The Rainbow Pride Flag is the mother of all pride flags, as it represents the whole LGBTQA+ community.

This pride flag was created by a drag queen named Gilbert Baker. It was first unveiled in the San Francisco Gay Freedom Day Parade on June 25, 1978. Baker made this flag because of Harvey Milk. The politician asked Baker to come up with a symbol for the gay community. Originally, the color pink was included on the flag, but due to the shortage of pink fabric, it was removed a year later.

Once the flag is made and is flown on the said parade, Milk was assassinated, sparking an outrage to the gay community—the demands for the flag quickly increased. It features 6 colors: 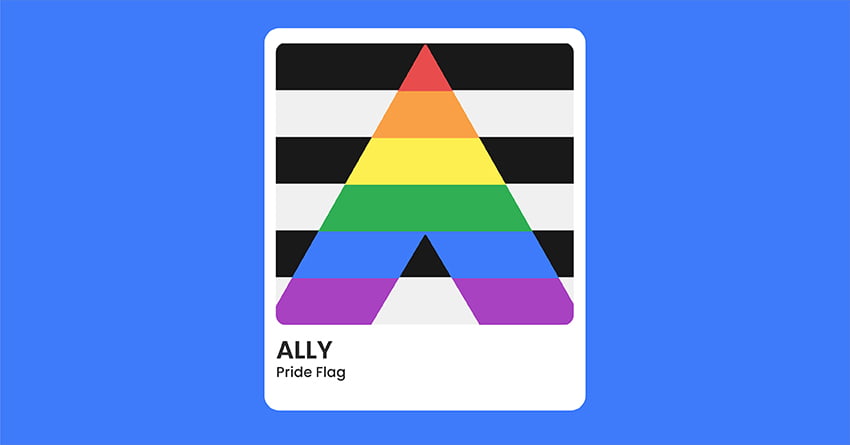 What’s great about the LGBTQA+ community is that they give representation to anyone. Even if you’re someone straight but is an ally to the said community, you are seen. There’s even a pride flag that represents the straight allies. The Ally Flag was created in the late 2000s and is made for heterosexual and/or cisgender people who support gender equality, equal civil rights, and fights along with the LGBTQA+ against discrimination.

There’s no specific creator for this flag. It features an A-shaped rainbow design superimposed on the black-and-white bar background. The A shape stands for Allies, while the rainbow color represents the whole LGBTQA+ community. As for the black and white stripes, it represents heterosexual and/or cisgender people. 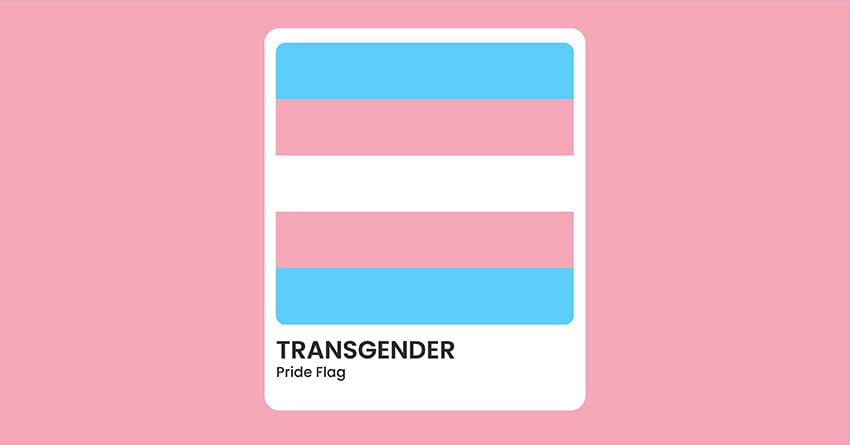 The Transgender Pride represents people who identify themselves as transgender, someone whose gender identity doesn’t align with their biological sex. Monica Helms, a transgender Navy veteran, created this flag back in 1999. She then unveiled it a pride parade in Phoenix in 2000.

According to Helms, the design and colors were carefully chosen, ensuring that this flag perfectly represents the transgender community. It features 5 stripes with 3 colors: 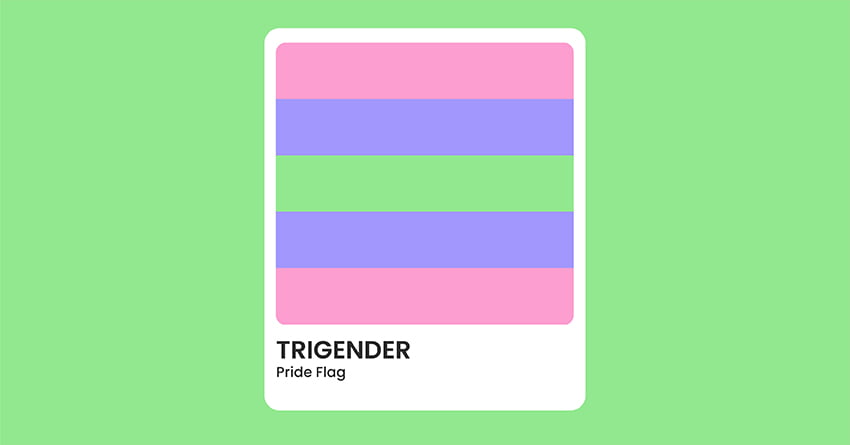 The Trigender flag represents people who identify themselves as trigender. Under this spectrum, you can experience three gender identities. It can be either changing it over time or simultaneously. It’s pretty like the genderfluid or genderqueer identities with minor differences.

Unfortunately, there’s no specific creator on this flag. There are no official meanings to the colors of the said flag, which features pink. blue, and green bars.

There are different pride flags that represent various gender identities. Though for some people might find this confusing, take some time to learn the stories behind the flags as well the messages it represents. For you, it might be a simple flag, but for people under the LGBTQA+ community, it’s a symbol of hope for gender equality.

Are you part of the LGBTQA+ community? A supportive straight ally? In line with pride month, we encourage you to bring awareness to the different gender identities and share this pride flag guide. Happy pride!