Time for another period-related guide! For today’s article, we’ll discuss facts about menstruation that every woman should know about.

Menstruation is still a taboo topic in most countries. Having period issues such as forgetting your pads? You can’t just casually talk about it– you gotta whisper it to your friend. See the menstrual pad ads? They use the blue liquid for demos as if we’re gushing out blue fluids out of your vag. Have a light red stain on your skirt? Oh, the horror! You gotta cover it up. Discussing menstruation in a high school health class? Nah, instructors can’t be direct and must use unexplained jargon or euphemisms.

Because of this, most females don’t know the important details about their periods. Some girls don’t even know that menstruation exists, not until they get their first period. This then leads to a ton of misconceptions such as: Having periods can protect you from getting pregnant, premenstrual syndrome is just all in your head, period blood is very dirty, and etc. Most women’s health issues connected with menstruation are also overlooked as well due to the lack of knowledge about it.

That’s why we’re here to sashay the stigma away. Start investing in your physical health by learning the different facts about menstruation.

1You spend about 3000 days of your life menstruating. On average, females spend 3,000 days (more than 8 years) of their lifetime menstruating. Yep, that’s 3000 days of menstrual bleeding, period pains, and mood swings! This also means you’ll be spending money on those 8 years for pads, tampons, and other period products. So seeing things from this perspective, you might want to consider switching to eco-friendly options for your period needs.

2Menstrual cups and cloth pads are the best eco-friendly options for your period. Speaking of eco-friendly options, going for menstrual cups and cloth pads are the best options for your period needs. Unlike disposable pads, tampons, and pantyliners, these items are reusable.

Menstrual cups, a flexible bell-shaped cup designed to collect period blood, can last up to two years. On the other hand, cloth pads can last up to 5 years. Imagine the money that you’ll be saving from switching to these period products!

Also, keep in mind that an average person can use about 12,000 to 16,000 disposable period products in their lifetime— that’s a lot of waste in our landfills! Not to mention all the other plastics involved in the manufacturing and packaging process of these disposable items. So by shifting to period cups or cloth pads, you’re not just saving tons of money, you’re also helping the environment.

3You can still get pregnant during your red days. This is one of the facts about menstruation that you should take note of. Being on your period doesn’t mean you’re “safe” from pregnancy. You can still be fertile at the start or at the end of your period, depending on how long your ovulation phase is.

It’s also possible to get spotting (light bleeding) during your ovulation phase, which can be mistaken as the start of menstruation.

Another reason why it’s possible to get pregnant during your period is that a man’s sperm can live inside a woman for up to 5 days after ejaculation. So if you’re going for some steamy period sex, don’t skip the birth control!

Read also: 10 Foods That Help with Period Cramps (And Foods To Avoid!)

4Your voice subtly changes during your period. Here’s one of the facts about menstruation that you surely haven’t heard yet.

5There are about 5000 euphemisms for periods across the globe. 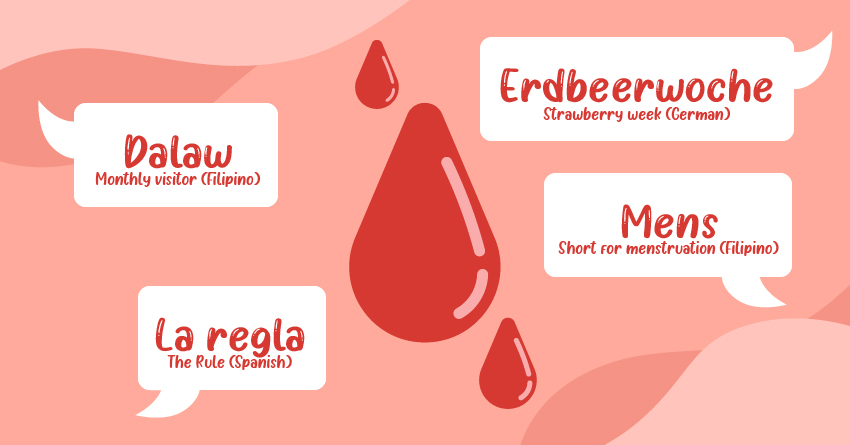 As we’ve mentioned earlier, menstruation is still a taboo subject in most countries. That’s why instead of using the actual terms such as period or menstruation, most people use euphemisms when discussing periods.

According to the 2016 international period survey conducted by Clue, there are about 5000 euphemisms for menstruation. Here are some of the said slang words:

6Smearing your face with period blood doesn’t give you clear skin! It’s a known superstitious belief in the Philippines that smearing your first-period flow in your face is a must. According to the elders, this will ensure smooth and glowing skin on your end. But this practice doesn’t just stop and end in the Philippines. Other countries are doing this practice too– it even became a skincare trend at some point.

There’s no study to back up the “period-blood-brings-less-acne-to-skin” claim. And even though period blood isn’t necessarily dirty, it’s also something that you shouldn’t use as a face mask. Most importantly, the blood itself is inflammatory, so applying period blood all over your face may cause an inflammatory reaction. This is one of the facts about menstruation that you’ll surely take note of. If you experience agonizing period cramps, reaching the big O can help you with that.

According to numerous studies, an orgasm releases endorphins, a group of hormones that have painkilling properties. The cortisol level (stress hormone) is also low after orgasming, putting you in a more relaxed state after the deed. So go ahead– have period sex, flick the bean, or play with your sex toys as you menstruate.

Read also: Orgasm for Women: All You Need To Know About the Female Climax

8You lose about 2-4 tablespoons of blood during your period. You bleed a lot less than you think. According to Healthline, the average person bleeds about 2-4 tablespoons of menstrual blood throughout their period week.

Now, the volume still depends on the individual. There are outside factors at play too, such as birth control and hormonal medications. Now, if you feel like your period flow is getting heavier than usual, we suggest consulting your healthcare provider. It may be a sign of an underlying condition.

9Have asthma? Getting your period can worsen its symptoms. 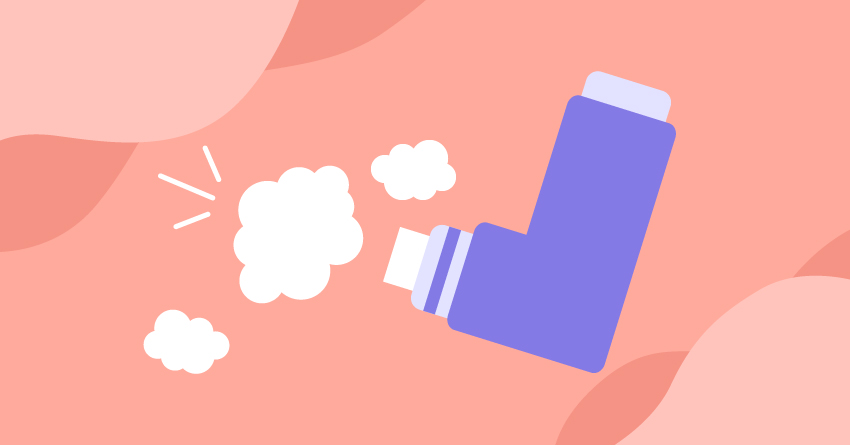 This is one of the facts about menstruation that you should keep in mind, especially if you have asthma. According to asthma.org.uk, hormones that are involved in processes like menstruation and pregnancy can be asthma triggers for women. These hormones increase inflammation in the body and affect the airways.

That’s why if you have asthma and the symptoms worsen during your period, consult your healthcare provider to lower the risks of hormones triggering your asthma.

10The duration of a menstrual cycle varies per individual. Here’s one of the facts about menstruation that you’ve probably heard about in your health class before. The menstrual cycle, which is counted from the first day of one period to the first day of the next, isn’t the same per individual. A whole period cycle may occur every 21 to 35 days. The duration of the menstruation phase (bleeding) also varies per individual, occurring every 2-7 days.

The menstrual cycle can also change as you age. You may start with long cycles, then eventually have shorter cycles as you reach menopause. Other factors such as birth control, body weight, and hormonal medications can affect the duration of your cycle.

Read also: 4 Phases of the Menstrual Cycle & What You’ll Feel for Each Phase If the period ain’t coming, don’t automatically think that you’re pregnant. There are several factors as to why you’re not having your menstruation yet. Here are some possible causes:

Now, if the missed period is a recurring thing, alongside heavy bleeding, nausea, severe pain, fever, or other unusual symptoms, seek help with your healthcare provider immediately.

12Having a period can make you hornier than usual. Now, there’s no definitive study for this one yet. But more and more experts are sharing their insights as to why women get hornier during their period. According to Dr. Nicole Bullock, an Ob-Gyne in Texas, there’s an uptick in testosterone levels in a female’s body during her menstruation, increasing her sexual arousal.

There’s also a 2013 study published in Hormones and Behavior. The study states that the changing levels of progesterone and estrogen– hormones involved in the menstrual cycle– have serious effects on one’s libido.

Menstruation is a natural activity that you shouldn’t be ashamed of. Taking time to learn more about it and even discussing it isn’t gross or weird– educating yourself about your body is essential.

So what are your thoughts about these facts about menstruation? Which ones have surprised you? Share your thoughts on our social media pages. And if you have other questions about periods and sexual health in general, you can also ask our Dr. Sex— she’ll be glad to help you out!