“Fuck the police,” they say. They really can’t be more right. While they may not always have our love, it can’t be denied that cops in uniforms carry with them an air of authority. That shade of navy blue color just somehow gets to us in ways that make us pay attention to the person wearing the uniform, whether we want to or not. So if standing out in your Halloween party is the goal in mind, then it’s the perfect choice of clothing for you. You’re sure to be an instant hit once you put the Police Woman costume on.

If you’re looking for a sexy Police Woman Halloween Costume that can help you nab that Best Costume Award on your Halloween party, then say no more. We have a collection of Police Officer Costumes for females ranging in different styles and cuts. Whether you want to be a tacky Police Woman or a stiff Jail Guard, we got them in our store waiting for you to flaunt them off to an appreciating crowd.

Read also: Sexy Halloween Costumes You Should Wear to Your Halloween Party

But in case you forget

The best part about Police Woman costumes is that: they’re not just for Halloween! These amazing outfits are for all seasons! Remember those movie scenes were strippers crash a party while wearing Police costumes? Yeah, I’m talking about those scenes where they pretend to be cops who suddenly showed up at the event to cut the festivity short, but they end up being the life of the party. We’re going to take some kinky inspiration from that.

Sexy time is any time, so I’m not joking when I said that Police Woman Costumes could be worn whole year-round. In case you have your doubts, you can ask your boyfriend what he thinks about using these sexy pieces of clothing in the bedroom. Most likely, he’s going to give the Police Woman Costume a big thumbs up (seriously, who can say no to them?) 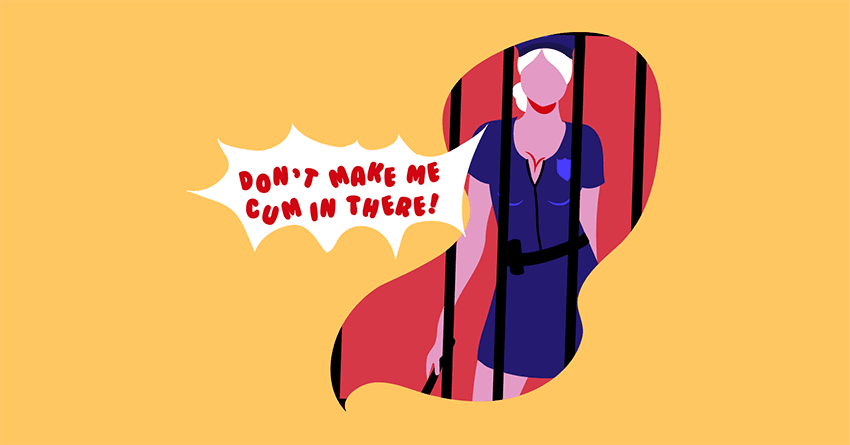 Now, there’s a reason why this kind of plot is a popular theme in adult websites. For the most part, it’s because it embodies what a Policewoman is supposed to do in real life. Her job is to correct the behavior of those who’ve been disobeying the law. It hits way too close to home that just the thought of it can get us worked up, how much more when we’re actually doing it.

By the way, just a quick reminder. Before you do the dirty with your boyfriend, you have to get his consent first. We’re big on consent here, so it has to be said. Don’t just pull out a baton without him knowing what’s about to happen.

This whole Policewoman roleplay thing may sound sexy as hell, but you can be giving your boyfriend a mini-heart attack if you surprise him with it. Just think about it. How are you going to like it if he suddenly just shows up with a butt plug when it’s never been introduced in the bedroom before? I mean, sure, sometimes surprises work, but just to be on the safe side, you may as well give him a heads up on what’s about to go down.

With that out of the way, we can move on to the details.

What do you need

As for accessories, I’ve already mentioned it earlier, but yeah, a baton can do you some real good. It’s not only for visuals, but it also has a practical use. You can keep it for your soft and rough spanking. Throw in a handcuff in there too, and you’re all set. You can use it for restricting your boyfriend’s movements, making it easier for you to have your way with him. Aside from those two mentioned, you can also get a POLICE badge, just so you got something you to show off while saying, “This is the Police. You’re under arrest!”

When it comes to your attitude, you’re going to be a strict warden who’s so dedicated to her job that she doesn’t mind working overtime a couple of times a week. You believe that even misfits can change their ways with the right form of discipline. And you have your own brand of control that you only dish out to the worst of them all. Your boyfriend is going to play the role of a cellmate who’s caused a ramble in prison. He still hasn’t changed his ways, and his behavior is encouraging more riots to happen.

Well, first off, you’re going to need a Police Woman Costume, of course. I suggest you get something that’s a bit more on the conservative side. You don’t want sloppiness in your costume, so don’t let it get crumpled bits. If you’re going to do this, then you may as well do it right. Iron your costume if you must.

As a jail warden, you saw it fit to give the troublemaker some badly needed discipline. You enter his cell one night, and immediately say something like, “Strip!”. You explain that it’s standard procedure, and you want to make sure he doesn’t have anything sharp and pointed. Using your hands, you frisk him, slowly and deliberately, until you find the organ between his legs hard and erect for you.

You start stroking him down there because you think it’s a “weapon.” You’ve confirmed your suspicions that he’s a very bad prisoner indeed. And that’s when you bring out your handcuff and baton to break him into submission. You know you got your work cut out for you. It’s gonna take a while before you can tame this wild beast in your hands. 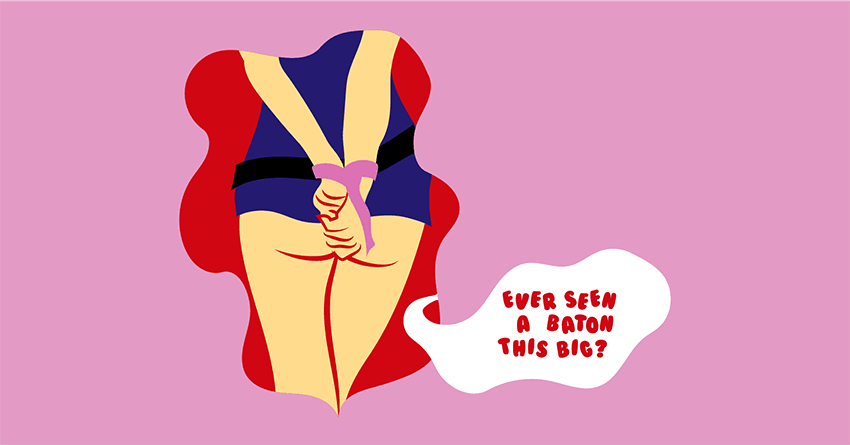 We’re deviating from the usual Police Woman roleplay. Let’s get out of the prison cell and enter the house of a cop in this bedroom scene. Usually, sexy scenarios involving cops are of them in line of duty. But I think it will be interesting if we can switch things up a little and experiment with a scene that involves their private lives. And that’s why in this scene that we’re going to teach you, you’re going to be roleplaying as a Policewoman who just got home from work but finds out that there’s a burglar in the house.

First off, we need to point out that we got a pretty brave burglar right here who have the guts to steal from a cop. But challenging the authority can be such a turn on sometimes, which makes it especially thrilling for a law-breaker if he can successfully break into a police’s house.

For this bedroom scene, I’m gonna ask you to wear any Police Woman Costume that you like. Anything can work here. What you need to keep in mind is that you’re slowly taking off your garments, and you’re getting ready to change into something more comfortable, but you noticed that there are weird noises in the house. So you’re half undressed when you start searching for the source of the noise.

And to your surprise, the burglar, who’s being roleplayed by your boyfriend, suddenly creeps up behind your back, renders you motionless by grabbing your hands to your back and tying them up.

You’re not used to this situation. You’re usually the one handcuffing people. You don’t understand it yourself, but you’re getting kinda excited.

The burglar handles you and guides you into your bedroom. He continues where you left off earlier and undresses you slowly. You want to fight back, but you can’t. He starts fondling your breasts. You tell him to stop, but there’s a part of you that’s enjoying being put in this situation. Your job requires you to be in charge 24/7, this embarrassing yet freeing position that you’re in right now is so new to you. Yet, you don’t hate it. In fact, you’re enjoying yourself as the burglar continues to take you roughly and relentlessly. 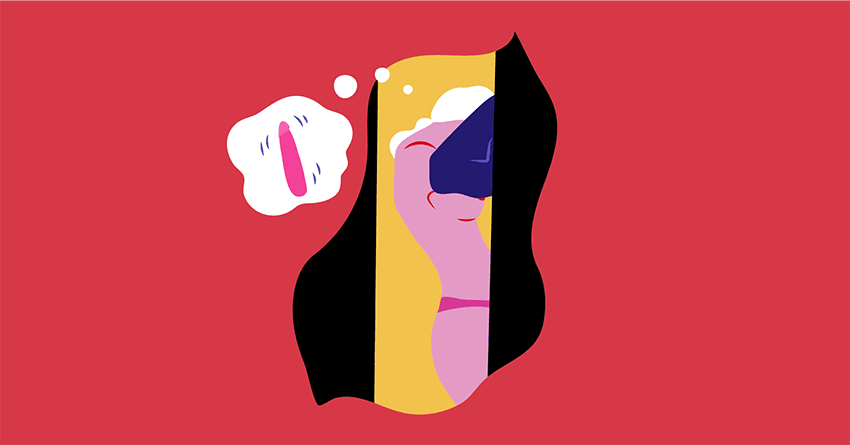 How to do the scene

While you’re too busy doing yourself, little do you know that your neighbor, who’s been crushing on you for the longest time, has snuck inside your bedroom and locked himself up in your closet. It’s the only way he thinks he can have you since he’s way too intimidated with you knowing that you’re a cop. It’s not the first time he’s done it. He’s very careful about what he’s doing. He sees you through the cracks in the closet. He’s been stroking his schlong while you’ve been having fun. Of course, your boyfriend can stop at just masturbating together with you, but if you’re not satisfied with that, he can always join you in bed to do a better job than your vibe.

Have a blast with your sexy Police Woman Costume. They’re sources of endless kinky fun! The ones we’ve listed here are just some of the play scenes you can do with them, but you’re absolutely welcome to come up with your original ideas. Just let your perverse mind take over, and we’re pretty sure you can come up with a long list of your own.