Trigger Warning: This post discusses and mentions the topic of rape culture and sexual assault.

On the first day of the year 2021, a 23-year old flight attendant, Christine Dacera, was found lifeless in a bathtub of the hotel room she’s staying in with her 11 friends.

The police immediately suspected that the whole situation is a rape-slay case, even calling it a “solved” case in just a few days (the case is still ongoing; the accused friends of Ms. Dacera have denied the rape allegations).

As the devastating news hit the media outlets, the whole nation started calling out Ms. Dacera’s friends, telling them to take accountability for what happened to their friend.

But along with the pleas for justice, some people are also calling out Ms. Dacera’s “behavior” and how it “contributed” to her demise.

The comments mentioned above are a manifestation of rape culture, a system of beliefs that normalizes and trivializes sexual violence. Beliefs under this culture have been an ongoing problem for sexual assault survivors, as it disregards their horrific experiences and even blamed them for them. Not only that, it creates an unsafe environment for women.

We need to put an end to this. Walking late at night shouldn’t be a frightening experience for women. Victims of sexual assault should be taken more seriously, and abusers should be held accountable for their crimes.

In line with Sexual Assault Awareness Month, we will be discussing rape culture and how we can stand up against it.

What is Rape Culture? The latest Philippine National Police (PNP) statistics show 1,794 reported rape casesnationwide from January to November 2020. However, Women’s rights advocates believe that this number isn’t the real representation of cases in the country. Many cases were left unreported due to the stigma surrounding sexual assault victims and rape culture.

Rape culture is a sociological system of beliefs wherein rape and other forms of sexual violence are normalized. It was coined in the 1970s, specifically under the book Rape: The First Sourcebook for Women by New York Radical Feminists; Noreen Connell and Cassandra Wilson. With this problematic concept, men are excused in the media and popular culture for raping women; people are more focused on what the victim is wearing, their behavior, relationship to the perpetrator, their promiscuity, their mental state, and their motives.

This is due to the misogynistic perception that women are “objects” and are less valued than men. There’s also this notion that men are naturally strong and dominant; that it’s their natural instinct to become violent at times. So when they harass or assault someone, that’s because they were “triggered” by something (the victim’s clothes, behavior, etc.) and not because they’re horrible individuals.

While no one disagrees that rape is wrong, rape culture has perpetuated harmful notions and behaviors regarding rape and sexual assault, such as the following: When a victim accuses someone of sexual assault, authorities and bystanders tend to focus on the victim and not on the perpetrator. Instead of putting all their energy into investigating the abuser, they would rather scrutinize the victim’s outfit, promiscuity, mental state, dating history, how drunk they were, and their behavior before the incident. This behavior is all about diminishing the severity of the abuse. Aggressiveness is seen as a “masculine” trait. So when a guy abuses someone, the abuser and some people may think that the assault isn’t as significant as the victim claims.

There’s also this notion that men only think about sex, so if a guy accuses someone of rape, some people would immediately disregard his claims— even implying that the victim should be thankful for getting laid.

Read also: 45 Warning Signs of a Toxic Relationship & How to Deal With It As rape culture trivializes rape, some individuals have used it as a punchline to their jokes. When someone calls them out for joking about rape, the “joker” or their supporters would say that the person complaining is just overreacting.

Read also: How to Fight Back Against Online Sexual Harassment Another behavior perpetuated in rape culture is the tolerance for sexual harassment or abuse in one’s home, neighborhood, workplace, recreational spots, or online space.

Some bystanders would also rather shut their mouths instead of calling out the abuser; sexual harassment has always been trivialized, so some think that the abusive actions aren’t a “big deal” at all. Another behavior associated with rape culture is the continuous discrediting of the victims’ accusations. People would rather believe that the victim is lying and only reporting for attention and money rather than believing the incident.

Now, false accusations do happen, but these are rare occurrences. According to the 2010 study published in the National Library of Medicine, the prevalence of false allegations is between 2% and 10%.

How We Can Stand Against Rape Culture

As you’ve read the common behaviors associated with rape culture, you’ve probably realized how deeply ingrained this culture in our society. You’ve most likely heard some of the sample statements above— some of you may even think that these behaviors are normal.

However, that’s not the case. The mentioned behaviors above leave lasting trauma to the victims. That’s why it’s vital for us to unlearn the rape culture beliefs and start focusing on making the world a better and safer space for everyone. Here are some of the steps that we can take to stand up against rape culture.

1Keep in mind that no one deserves to be harassed, abused, assaulted, or raped. Changing your mindset is a great start to unlearn the beliefs of rape culture. You need to keep in mind that there’s no such thing as “risk factors” for sexual assault.

A woman who is blackout drunk shouldn’t be expected to get raped. Someone who likes clubbing isn’t “asking for it.” Posting bikini photos online isn’t an invitation to get harassed. No one deserves any form of assault and harassment.

2Always communicate with your partner and ask for their informed consent. Aside from changing your perspective about sexual assault, it’s also important to practice enthusiastic consent in your life. Start with your own relationships. Whether in a sexual or non-sexual context, make sure that consent has freely been given from your partner, friend, or family member. Along with that, make sure to learn to say no in uncompromising situations and call out people that don’t respect your boundaries.

3Believe and support the survivors of sexual assault. 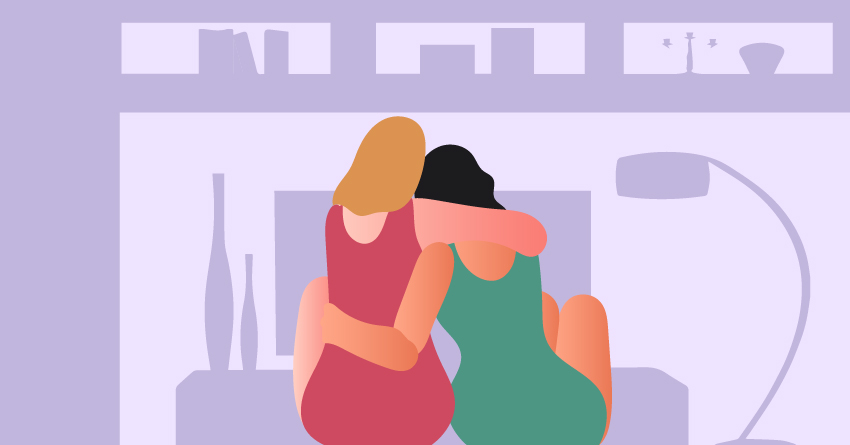 When individuals voice out their narrative, believe them— as simple as that. Don’t let the “false rape allegations” myth stop you from helping out a sexual assault survivor.

As we’ve mentioned, fake accusations are rare; 90% to 98% of sexual assault cases are real incidents. Besides, there’s no such thing as a “survivor’s privilege.” There’s nothing that a survivor can gain from reporting their case— some survivors are even punished for doing so.

Unless it has proven that there is miscommunication between parties or that the survivor is blatantly lying, we suggest helping the survivor get through this painful time; instead of being skeptical with their story, support and encourage the victim to report the perpetrator to the authorities.

If we just keep on being doubtful with every case, then rape culture will continue to be prevalent; more women will keep their mouths shut and deal with the psychological stress alone. This is the only way that we will have a chance to end sexual violence.

4Hold abusers accountable for their actions. If we want to end rape culture, we need to hold more abusers accountable for what they did. Encourage the victims to report it to the authorities. Here’s a brief guide on the laws associated with sexual assault that you can file against the perpetrator.

If a person engages in sexual acts with someone by forcing them, making them unconscious, using their fraudulent machination or grave abuse authority, or when the offended party is under twelve (12) years of age or demented, you can report them under the Republic Act 8353. The perpetrator will be punished by Reclusion Perpetua or permanent imprisonment, if proven guilty.

This law is currently in the amendment process, redefining the law by putting the concept of rape at its center, increasing the age of statutory rape (from 12 to 16 years of age), and repealing the forgiveness clause. For more information about the amendment, check their policy brief here.

If the perpetrator engages in gender-based online sexual harassment, this is the law that you can file a case into. The Republic Act 11313: Safe Spaces Act or “Bawal Bastos Act” addresses the existing gaps and issues of inequality, safety, and security of both women and men in private and public and online spaces.

If the abuser is coercing or forcing the victim into engaging in cybersex, you can file a case against that person under the Republic Act No. 10175: Cybercrime Prevention Act of 2012. According to the section C-1 of RA 10175, having “the willful engagement, maintenance, control, or operation, directly or indirectly, of any lascivious exhibition of sexual organs or sexual activity, with the aid of a computer system, for favor or consideration.” is a punishable act. Heard a close friend joking about rape? Saw a comedy stand-up bit wherein the comedian is making sexist remarks? Read a comment from your auntie saying a victim-blaming statement about a rape case?

Instead of just removing yourself from the convo, exiting the youtube app, or ignoring your aunt’s comment, take the time to share facts and real insights about rape culture.

The more we tolerate the behaviors associated with this problematic concept, the harder it would be to escape from it. So we suggest taking up the courage to explain why their statements are offensive and why it’s perpetuating a dangerous environment for women and minorities.

6Speak out about this toxic culture and ways to fight against it. Educate your friends and family about rape culture by sharing various resources through social media or in person, such as this article. The more people aware of the dangers surrounding their societal concept, the more people will stand against it.

7Support organizations that are raising awareness about it. Besides sharing educational content and digital resources, you can also help raise awareness about rape culture by supporting organizations that educate the masses.

Follow social media pages such as Gabriela Women’s Party and End Rape Culture PH— sharing their informative posts and supporting their initiatives will come a long way. You can also share your stories and insights through Twitter; use the hashtags #HijaAko or #BabaeAko.

As you’ve learned about rape culture and ways to stand against it, we would like to encourage you to be an active bystander and an ally for sexual assault survivors.

Collective action is the key to eradicating sexual violence and harassment. Encourage women and the minority to amplify their voices, support organizations and women’s rights groups that educate the masses, and get involved in numerous government initiatives against rape culture. Let’s work together in creating safer spaces for everyone!